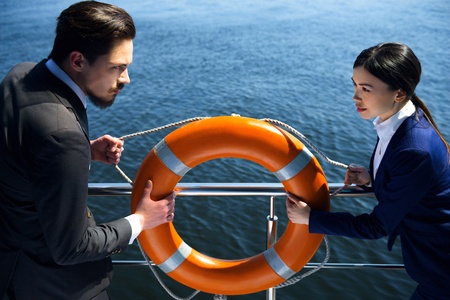 More than 70% of executives are not effective at supporting new-to-role peers and managers according the Corporate Executive Board’s research. If you are like most bosses, when you were promoted or hired into your current role you were expected to perform with little to no guidance.  Somehow you figured out what you needed to do to be successful.  After all, you were put in your leadership role because you were qualified, had past success, and were sized up as fit to do the new role.

This contributes to why a “sink or swim” philosophy of role transitions is rarely questioned in most organizations.

The fall out effects of sink or swim role transitions are unmistakable:

The bottom line is that unmanaged role transitions can cost unnecessary interference, ineffectiveness, under-performance, and flame out high potential talent.

Yet, even though many leaders somehow manage to muddle through their initial few months, and even first year, most leaders I support with role transition coaching report how much better they would have done if they had known then what they know now.  Research supports this: as according the Corporate Executive Board, new leaders with effective transition planning and execution reached their potential 9 months faster than those with average transition processes.

One thing my clients learn in the role transition coaching process is just how much difference a strategic partnership with their boss can make in an effective transition.

Being a successful leader for your new hire:

In many recent blog posts, I’ve been writing about what the leader in a role transition can do to facilitate their own success.  Yet, a boss has a unique ability to do some things that can set a new leader up for success in ways they just can’t do as well on their own.  Stay tune for my next blog to learn 10 Best Practices Bosses Can Do to Set a Newly Hired or Promoted Leader Up For Success by subscribing here, or click the button below.

It is said that a leader casts a tall shadow.  When a person steps into a new role, there are a great deal of unknowns and uncertainty.  The boss who helps a new direct report strategically manage this risky time well for themselves and others is far more likely to help him/her create a positive shadow.

This nets out really useful results such as:

Did you have a sink-or-swim style hiring process or a facilitated transitional leadership plan? Tell us below!